Let’s start with a geography lesson. The Langhe is an area with the region of Piemonte, which is in north-west Italy. Now Piemonte, as of course you know, means “foot of the mountains”. So… and I can tell you’re catching on now… there are mountains all around.

Head north and you reach the Valle d’Aosta, with resorts like Champoluc and Courmayeur. To the west just before you get there is the Gran Paradiso National Park which I’m reliably informed is amazing for ski touring. Then you’ve got the well-known resorts of the Milky Way pretty much directly west of Turin, and south of there, smaller places like Crisollo and Prali, which sit under the shadow of Monviso, the rather impressive, pointy mountain you can see somewhere above this post. Finally, there are a few resorts south of here, in the mountains which separate the Langhe from the Mediterranean.

These ski areas – places like Frabosa Soprana, Artesina and Limone Piemonte – are not as well-known as those further north, and for good reason I guess. They are relatively small and, due to their height and proximity to the Mediterranean, don’t have the most reliable snow records. But, when it does snow, because of this proximity to the sea, it really snows.

This winter is proving to be one of the best ever in these parts so when I heard that another big storm was on its way, I (rather cleverly if I do say so myself) arranged to meet our architects (Alpine Eco) at the house for a spot of measuring up. They live in Chamonix and are keen snowboarders, so as soon as we were done, we headed up to Limone Piemonte.

Even with our ridiculously out-of-date sat nav trying to sabotage us at every turn combining beautifully with my own somewhat wayward sense of direction, we made it in just over an hour. It was snowing lightly as we headed into town to look over plans and discuss ideas for the house. This was a business trip after all, we weren’t here to have fun. Unfortunately the only place open was a bar. Needs must I guess… 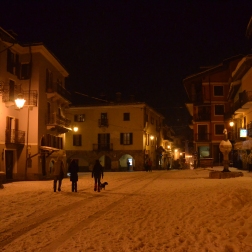 The next morning, we awoke to exactly what we had been hoping for – nearly two feet of fresh snow. Unfortunately, every silver lining has a cloud. On this occasion, the cloud was that it had snowed too much and most of the lifts were shut. And it was also a real cloud, one that meant we couldn’t see a single thing! We still managed to get up there though and had some great fun riding, both on and off piste. Nothing had been pisted and with the somewhat limited visibility it was hard to tell the difference anyway.

Everyone was incredibly friendly; happy to tell us where to head for the best riding and helping us out whenever we got stuck in the trees, which was more often than we would have liked. To be fair, we helped a few other people too. The snow was deep and heavy so if it wasn’t steep, you weren’t going anywhere. Straight-lining down a red piste to pick up as much speed as we could and then still getting so stuck that we had to unstrap and walk the rest of the way down was a particular low point!

The following day brought more of the same. The snow just kept on falling. Much of the mountain remained closed, but given that we were pretty much the only people there, fresh tracks weren’t exactly hard to come by.

And that was it, our brief visit to Limone had come to an end. We only got a small glimpse of what it had to offer, but I liked what I saw and can’t wait to go back again. Even the guys from Chamonix were impressed, though I think it might have been the food that wowed them the most, having grown slightly tired of the French love for melting cheese onto anything and everything.

Limone isn’t the sort of place that too many people outside of Piemonte have even heard of, and it’s all the better for it. It’s a totally different experience to visiting the mega-resorts further north and one that I personally love. There may not be as much terrain, but the slopes are empty, you don’t have to fight for fresh tracks, the people are friendly and the food is both delicious and cheap. What more could you want?

Oh, but don’t tell too many people, if I turn up there next time and it’s really crowded I’ll be furious, and I’m only just getting over my last bout of anger!

8 thoughts on “Italy’s other mountains – snowboarding in Limone Piemonte”