Mangialonga is one of the biggest annual events in these parts, attracting people from across Europe. It’s described an “Enogastronomic walk”, basically a walk with great local food and wine. What’s not to like?

Starting in the centre of La Morra the walk winds down through the vineyards for 4km to the frazione of Santa Maria with six stops along the way – aperitivo, antipasto, primo, secondo, formaggio and dolce. At each stop you collect your plate of food and then, with your wine glass hanging in a little pouch around your neck, go to the wine counter, where a selection of dozens of local bottles awaits. Each stop has a different variety – Dolcetto, Barbera, Nebbiolo, Barolo and Moscato.

Sounds great, right? That’s what we thought too, so we signed up and handed over 40 Euros each.

The next day we arrived at Piazza Castello, wine glasses around our necks and headed off down the hill. It was busy, but we hung back a few paces and found some space of our own. The first stop, aperitivi, was pleasant enough. We had some olives, bruschetta, some kind of pesto-type thing, but we wanted the real food, so we headed off pretty quickly towards the next stop. 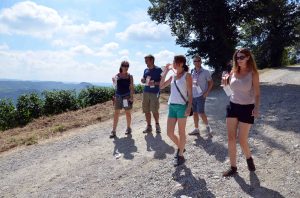 The walk down through the vineyards was wonderful. La Morra is one of the highest villages around so the views of the Langhe hills were incredible the whole way. Everyone was quite spread out now so it was a peaceful, relaxing stroll.

It turns out Mangialonga has developed a bit of a reputation as a drinker’s paradise. We gingerly approached the wine counter, where most of the noise was coming from… a girl sat on top of a wall directing the crowds of baying men beneath her, until they started shouting for her to get naked, at which point she threw her wine at them in disgust and jumped down.

The crowd swayed back and forwards as one, Dolcetto flying everywhere. It was impossible to get to the counter as dozens of people stood there getting a glassful, necking it and then asking for another.

For years I’ve been told this doesn’t happen in Italy, that Italians know how to drink, that they don’t have the English obsession with drinking to get drunk. They enjoy their wine, but in moderation. They like to savour it. It appears this reputation no longer holds true. This lot were on it. It was like a night out in Newcastle, but with sunshine and good-looking people.

Now don’t get me wrong, we were there to have fun. We had every intention of drinking more wine than one should at midday on a Sunday, we just didn’t fancy fighting for it or showering in it.

We put our heads together and came up with a plan. If we abandoned this first stop, we could get ahead of the baying mob and enjoy the rest of the walk in relative peace, just as it’s supposed to be enjoyed, so we headed off. 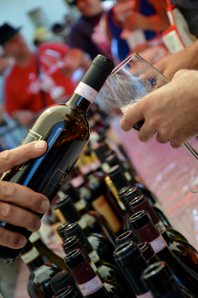 The next stop was Barbera, Nebbiolo and Tajarin al Ragu. Three of my favourite things. For about five minutes our tactics worked perfectly… we got our wine, a large bowl of delicious pasta and settled down in the sun. They had at least 40 different bottles of Barbera and the same of Nebbiolo to choose from, so not wanting to be rude we quickly went up and each got another glass. And another.

And then the chanting started again. They had arrived. The orderly queue for wine became a bundle and shouts of “drink to celebrate, drink to vomit” echoed across the vineyards. A stag do valiantly tried to support their ailing stag as he stumbled through the crowds desperate for another glass of Barbera.

We quickly headed off to the next stop. This was one of the best… braised veal in Barolo, accompanied by, of course, Barolo. Learning from our experience of the last stop, we made the most of the wine here, treating ourselves to several glasses before the hordes arrived. It was a rare treat to be able to try so many delicious Barolos.

And then, sure enough, the peace was shattered once more and so off we went.

At the penultimate stop, we enjoyed a plate of cheese and yet more Barolo, before catching a shuttle bus back up the hill to the start point in La Morra for the final stop – Moscato with hazelnut cake. A band was playing in the square now and there was a real party atmosphere. Most of the serious drinkers were obviously still out on the route enjoying their Barolo, though a few lone drunks stumbled around the piazza or tried, unconvincingly, to dance to the music.

And that was it, Mangialonga, for us at least, was over. It’s a great concept, well organised and with fantastic local food and wine, but for now at least, it has been ruined by people who obviously see it just as a good way to ‘drink until they puke’.

It’s a real shame. A couple of years ago, it was probably amazing and hopefully a couple of years from now their attention will shift to a different event and Mangialonga will be able to revert to being a great day out for people who want a nice walk interspersed with great local dishes and wines. I must be getting old…