Having decided we were definitely moving to Piemonte, a region in which we’d spent just three days between us, we thought we’d probably best leave Google alone for a bit and actually get on a plane. So, we headed out for our first house-hunting weekend.

I’d like to say it went well, that we found our dream property straight away and never looked back. It’s more romantic that way. But, of course, real life isn’t like that. We visited some awful places. The photos online  had looked so good, but for some reason they never show the warehouses, slightly scary men with fires or the fact that the house receives just one hour of sunlight a day.

On the plus side, we loved the area. I thought I knew what to expect but the landscape just completely blew me away. To be honest, it still does. The people were friendly and helpful and the food and wine were cheap, delicious and plentiful. Yep, I was going to like it here. 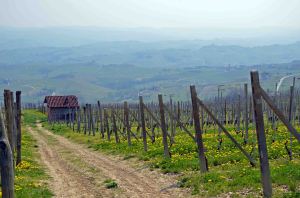 We did a couple more of these fruitless weekend house-hunting trips before the reality of the situation set in. It was a fun way to spend a couple of days, but we were never going to find a place like this. We were driving hundreds of miles, looking at completely inappropriate houses and spending a fortune on hire cars and hotels. If we were really going to do this we needed to do it properly. It was time to quit our jobs and move out to Italy.

This was the scary bit.

I’d been in my job for 12 years. It paid well, took me to some incredible places (the Arctic Circle, Morocco, Leamington Spa…) and was enjoyable roughly 50 per cent of the time. But  it was also slowly destroying me. I still vividly remember taking my boss aside for ‘a chat’ out the back of the Geneva Motor Show. I was shaking like a leaf, my voice trembling as I spoke. When it was done I felt shellshocked. Happy and terrified. This is it. It’s real now. I need a beer.

Two months later we had rented out our house, got Otto his doggy passport, loaded up the car and were headed for Italy.

Now we were here we could take the house hunting to another level. We gave out leaflets, spoke to people in bars and wineries, scoured the internet and met with a lot more agents. We expanded our search area to cover the whole of the Monferrato, Langhe and Roero and saw more than 50 houses. Picky? Us?

There were two places that we nearly bought, but frustratingly neither owner was willing to listen to our offers. Moving on from that was tough, we started to wonder what would happen if we never found anywhere. We even started thinking about trying other parts of Italy, but we always came back around to Piemonte. We just told ourselves we had to keep plugging away.

Eventually, out of desperation, we contacted an agent we had been warned against. I didn’t particularly want to, but my parents were coming out to visit and we thought they would like to see a few houses while they were here. Having visited every single property on the market with the decent agents, we had little choice. And anyway, how bad could they be?

As it turned out, really, really bad, but that’s a story for another day. The important thing is, they ended up having the house we wanted – a long, yellow cascina just outside Barolo. We knew it was for us as soon as we got there (is that romantic enough for you?). Although Otto did get himself stuck to a homemade mouse trap – a piece of card covered in the world’s stickiest glue. A bad omen? Maybe. But we wanted the place regardless. It was time to cut Otto’s glue-covered hair and start making offers again…

And in case you missed it, you can read part 1 here

Vacation Home Among the Barolo Vines