As all you wine aficionados know, Novello (where we live) is in the Barolo zone; a group of 11 villages which is able to take its finest Nebbiolo grapes and turn them into Barolo, the “King of wines”.

Ten miles to the north is the Barbaresco zone. Here, these same Nebbiolo grapes make… wait for it… Barbaresco.

Far smaller than Barolo, it consists of three main villages – Barbaresco, Neive and Treiso – and just under 2,000 acres of vineyards (compared to Barolo’s 3,100 acres). 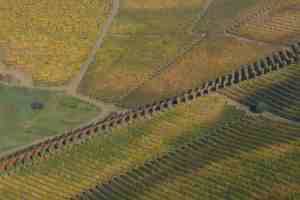 At the risk of being a traitor to my ‘zone’, I’ve noticed that whenever I’ve tried the two side-by-side, I tend to prefer Barbaresco. I’ve still not tried that many though, so in the name of science – and on the advice of the ever-knowledgable Italianna – we headed up to Neive last week to visit Cantina del Glicine.

Our first port of call was the incredible cantina. Nearly 500 years old, it stretches right under the building, reaching a depth of up (or down) to nine metres underground and maintaining a constant temperature throughout the year. Small oak and chestnut casks filled with Barbaresco are slotted into every available alcove, as they have been for centuries.

Moving upstairs to the cosy tasting room, we settled in for what would be a long afternoon. Allegra’s family had travelled over from England (bringing with them a few essentials…Chocolate Digestives, Creme Eggs and Hot Cross Buns. We insist that every guest brings us something!) and joined us for the tasting.

We began with a white wine, a Roero Arneis, before moving onto the reds. The first was a Dolcetto (my father-in-law’s favourite), which is an everyday, easy-drinking wine, good with lunch, a light dinner or even breakfast if you’re that way inclined. It’s definitely not sweet, despite it’s name, which means little sweet one.

This was followed by a Nebbiolo (which was ok), two Barberas (one of which was among the best Barberas I’ve tried so far), two Barbarescos (which were both very good) and three delicious Grappas. Even in tasting-sized servings, that’s a lot of wine, but with the help of some cheese and salami, we bravely soldiered on through!

I would be the world’s worst wine reviewer as I have a knack of really enjoying each wine until the next one comes along, at which point, this new one is the best I’ve ever tasted and the previous glass is completely forgotten about. I should probably start taking notes… Anyway, I was particularly taken by the Barbera La Sconsolata and the Barbaresco Curra. I know this because I have a few bottles of each of them sitting in the kitchen.

So to the results of my not very scientific experiment into whether Barbaresco is better than Barolo… erm, from my huge sample of one winery, in which I only tried Barbaresco, it’s hard to say. Its good, and possibly more approachable than Barolo for a casual wine drinker like me, but sadly I think I’ll have to try a lot of more of both of them before I can draw any real conclusions. It’s a tough life…

22 thoughts on “Barbaresco or Barolo”